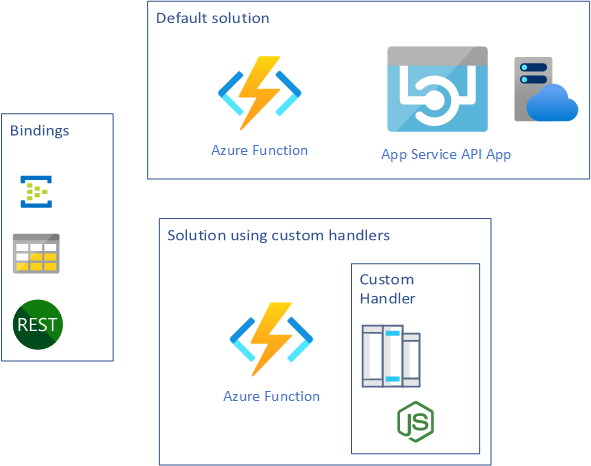 Azure functions has a really interesting feature called ’custom handlers’ which is something I had not previously run across. Custom Handler feature allows you to run/wrap another service, such as custom API service with Azure Functions, which would not otherwise be directly supported with Azure Functions runtime

I decided to do some tests with this feature using runtime that is supported (NodeJS) but with framework Express.JS*, which is not directly supported without re-architecting the solution

*Additionally: I find using Express.js as API very often my preferred choice, and this feature seems to bridge a certain gap for me, while not being the prime target for Custom Handler feature.

Since there has been some traffic to this blog, I posted an example @ https://github.com/jsa2/azureFNcustomHandlers for example deployment.

The demo is also available from https://fn.dewi.red

I would mostly use this in scenario where you have existing Express.js based API that uses Express.js Middlewares and can’t (or wont) re-architect the service, but want to have other function approaches such as various bindings (Event Hub, Storage etc) available directly to the ExpressJS based Node API, without having to first handle them on a Azure Functions before passing them to another service, such as App Service API app, that can natively support ExpressJS.

Besides just me writing here about using Express.js and Azure Functions, it is highly recommended to see Azure as holistic solution for creating and managing API architectures; This example of custom handlers just shows that Azure Functions can go to great lengths to technically support various approaches – It’s entirely another thing whether this approach is recommended in the first place. The reader should treat it as just an testament to the flexibility of Azure Functions, and available approaches

Important sources of this article

Shifting from Express.js to Azure Functions

Microsoft docs has great article for understanding the shift from Express.js to Azure functions.

Read more about function Proxies: You can use these proxies to break a large API into multiple function apps (as in a microservice architecture), while still presenting a single API surface for clients) – https://docs.microsoft.com/en-us/azure/azure-functions/functions-proxies

* Test actually not done, but since it works on consumption and local function runtime, it should work

** Had generally problems getting EH triggers working regardless the function scenario (custom handlers / Native Functions), wrote some test notes how I got them working

To get Event Hub working on Cloud runtime, I did the following things (Since the Event Hub was not firing)

In order to use custom handler, and to use standard express response, instead of default functions host expecting response I opted for following setup

Upon searching for Express.js and Azure Functions I found following blog Azure Functions Custom Handlers – Bram.us, which was helpful providing answer, that somebody has tested Express.js previously as custom handler (Given way custom handlers work they should work in most scenarios, as they are invoked as separate process inside the function host)

While I created a separate functions for each Express Route/Function, there is an existing issue open for another use case of using wildcard directives. You can read more about the issue here.

Based on the approach of creating separate function for Each Express handler, I was not able to access the handler for internally callable event based triggers such as storage.

0 comments on “Express.JS middlewares on Azure Functions via custom handlers”

Community contributors append every now and then writes also to this blog!