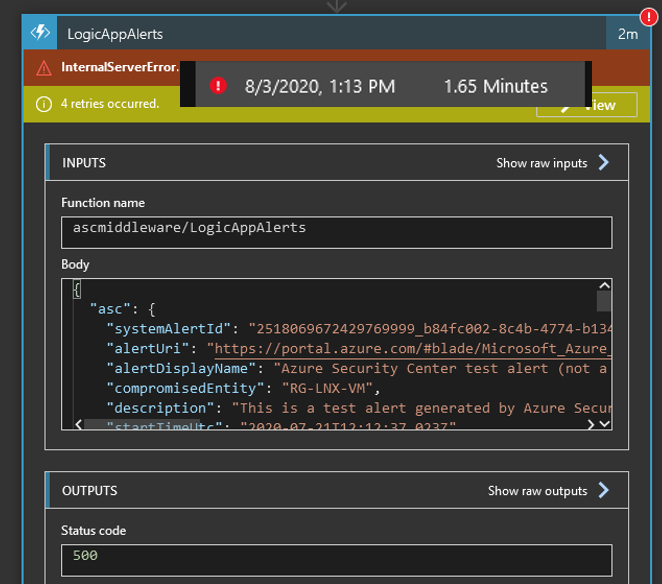 Logic apps and functions together

I was recently doing a small scale integration between Azure Functions and Azure Logic Apps. In this case I wanted to control retry behavior of Logic Apps HTTP actions. Below are my findings related to error handling and producing desired behavior in Logic Apps – Also ensuring that I can replicate the error handling with other clients, not just Logic Apps.

Default behavior of Logic Apps was in charge of the retry behavior. This caused more retries than I felt was necessary when faced with HTTP response code 500. Especially since unhandled errors would cause the Azure Function to respond with 500, which caused long time until it would show as fail

First change I made was to identify errors which we’re catch-able (known errors), and handle them in try catch block.

The second change was to lookup HTTP code, that would tell the Logic Apps action, that ’The client SHOULD NOT repeat the request without modifications’ Turns out this is in spec of status code 400, and Logic Apps HTTP request aligns with the spec

Its also good to understand, that this doesn’t deny server responding with 500 when there is other error which is caused by the platform, or runtime itself. Such as transient errors, or error during startup, in these cases the retry behavior is desired to an extent.

The result of remediation

Stopping retry behavior with 400 is typically used, when the client request is wrong, in this case the behavior is also produced in select errors of the NodeJS API (Azure Function)

Logic Apps allow also controlling retry policy in Logic Apps design. This is probably the best practice in the end. In my case I wanted to ensure, that the retrying is stopped even if the caller is not Logic Apps. This tries to ensure that if the client calling doesnt have retry behavior settings, then at least if it aligns with the specification of HTTP400, it shouldn’t retry the request.

My colleagues append writes also to this blog!