If there is single sentence I would emphasize regarding all things AAD, then it would be ”You can’t hide things in AAD” – This sentence is based on the premise, that in order for services and users to work and interact there has to be visibility between objects in the directory.

One of the most common examples is, that sometimes a new hire in a large company directory has been ”hidden” by setting ”msExchHideFromAddressLists” value to true. This done in order to hide the user from Exchange Address List, but that really is the only thing that setting does. It does absolutely nothing to hide the user from AAD, (or from on-prem AD),

Lets start by saying that Graph API is The most powerful invention Microsoft has devised in the last few years. You can already see that many of the Microsoft Client Apps fetch their oAuth2 Access Tokens with resource graph defined as their preferred resource. If you’re AAD or Office Dev this thing is going make you’re life so much easier! For me it represents the greatest thing since sliced bread :)…

This means, that when such powerful API exists, there must be also in-depth understanding of it’s capabilities:

Below is demo of a standard user creating a ”listener for all delta changes” in the directory.

One can only imagine, how much an persistent presence having attacker would benefit on this kind of listener, that lists delta changes such as addition of new groups, phone numbers, title changes, changes in group memberships etc.

What standard non-privileged user can get by using delta subscription? 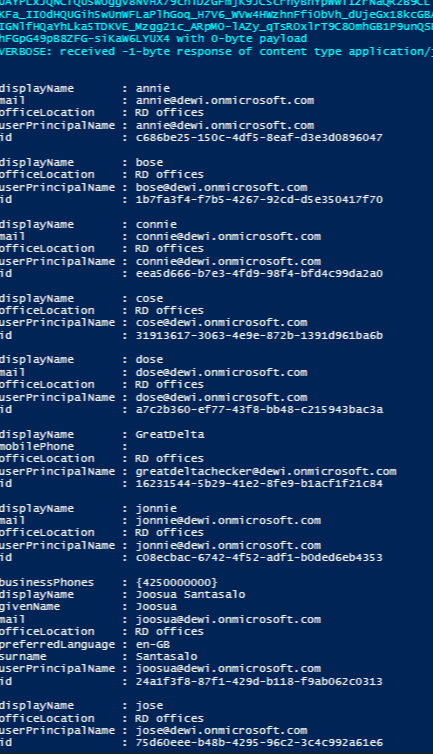 Query Any Delta Change for directory objects, after you’ve defined what to listen first in the initial request

#User permissions
Any internal user will work, regardless Directory Role = Normal, even unlicensed user account can do this

#ADAL
you must have ADAL library files to run this example

#Scopes
”scp”: ”AuditLog.Read.All Directory.AccessAsUser.All Directory.ReadWrite.All Group.ReadWrite.All
-When you use Powershell as ClientID you will get these static scopes for all users, regardless of the user permissions (User Permissions are separately then checked against AAD)